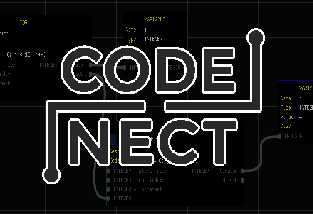 CodeNect is a visual programming software aimed for beginners at programming. This is developed for my thesis. The source code is available

Windows pre-built binaries are available over at itchio

Choosing the Technology and Tools

Initially during the planning, way before the development has started, I was really looking forward to finally using the Haxe programming language as I have been keeping an eye on it for a very long time but with no solid reason yet to use it. So then after deciding to try out Haxe, I have looked around for the tools that I could use to further ease the development, especially for the GUI and Nodes libraries as I do not want to spend a lot of unneeded time writing those myself. Then I found the Kha and the zui libraries.

So with the preparations completed. I begun the development and here are the experiences with Haxe:

Suffice to say, that my first endeavor with Haxe is not a good one, but I am still interested in using it perhaps next time for game development. For now, I have to choose another stack for the software.

So why not Lua? I could really use Lua + LOVE framework for the project and for the following reasons:

But the main takeaway is that, I felt that I do not have time to write my own Nodes system with it. Also, I really do not know how to even start writing that complicated system. I know, kind of a silly excuse, but that is that. Oh, GUI is also not mature with LOVE (atleast with the libraries I know that exist).

I also found out many Nodes library that I can use with JS, but then again, I want to not use the browser/web technology as my laptop is old and has RAM limitations (3gb, yeah). Also the libraries I have found seem to have a lot of issues and are not actively maintained anymore?

NO WAY IN EARTH I WOULD SPEND MONTHS WRITING IN JAVA

Ah, C++, the most complicated programming language I have used in my life. It is very powerful but complicated. Unlike my defacto favorite which is Lua, even if I spend years and years using it, I will never be able to completely master it or wrap my head around it fully like with Lua (I mean, is there someone who knows C++ all throughout?).

Well, there is a lot of Nodes library for C++. There are atleast 3 different ImNodes named library. Also, I have a lot of experience with using DearImGui as GUI for software development (See my previous project Geo::Math). (Then again, while I am writing this post I realized that there are ImGui bindings for Lua and LOVE, so perhaps I could make ImNodes work for LOVE using cimgui? Oh well, no time for regret)

I think that the main reason that drove me to finally using C++ is that there is a part of me that really wants to learn more about C++. I am hopelessly a fan of it though I have a lot of complaints with it such as:

There is no need to mention that most of the development time using C++ has been debugging why it segfaults and why are strings corrupted or missing. We all know that I am bound to experience problems with pointers and memory address.

If you will check the source code, you will frown upon me for not using any smart pointers. I have my reasons why I wrote the entire software using raw pointers and such but in summary, I want to learn C++, and that includes almost manual memory management. Perhaps next time, I will resort to using smart pointers and auto to make life easier.

Also, when debugging, I always did the bunch of print statements rather than using a debugger, but I think there was this one time that I used lldb to get a lead on why it segfaults after hours of print every other line of code. The cause of the segfault? Haha, you know it, referencing a null pointer.

Another thing that I am worried that would get a lot of criticism in the source code is the fact that I just wrote almost all of the singleton (I maybe technically wrong with my definition of singleton) structs as static. I know that there is a better way on how to make a struct singleton but during the development I just stuck with static methods and properties to make them like global

During the early development of CodeNect, I have used the Xmake build system. I mean, I know Lua so this would be a better option that using Makefile or something, and as much as possible, no to CMake.

But Xmake has little number of users and so guides and references are sparse online. Their documentation is complete but there are things of course that I do not understand quite easily from there so Stackoverflow is a nice place to use as reference.

So after fiddling with Xmake, I have tried using Meson, Genie, and Premake but to no avail as I had many issues with those that I do not remember right now. So a friend over at discord helped me convert my Xmake build system to CMake. To be honest I still do not understand CMake that much to the point that I can easily add or modify the CMake script but at least it works across Linux and Windows.

You know what is also terrifying aside from compiling a C++ project? Linking. I spent a lot of debugging and figuring out why I get linking error especially with the part that has to do with using the TinyC Compiler or libtcc. LibTCC is a very useful tool that I utilized for CodeNect so that my software will not rely on installing or requiring compilers for the machine it is being ran. But yeah, linking it as well as making sure that the necessary files can be found along the .exe is present. This would not really be a problem if there is an updated or maintained documentation, but sadly, even the homepage of LibTCC lacks the documentation for users as the docs there are more oriented towards developers (that will modify the libtcc source). Anyway, with the help of other websites and people over at discord, I have managed to make it work for both Linux and Windows in a very portable manner.

I used DearImGui for all the GUI in the software. They say that DearImGui is more suited as GUI for debugging/development and not for production, but for me DearImGui exceeds my GUI needs. Also, writing in Immediate Mode is way easier than making a lot of callbacks for events. I like the declarativeness that IM provides.

What I Love the Most About Immediate UI

Using the immediate mode paradigm, it made the process for managing the logic and behavior behind the Nodes system much easier. Instead of thinking how the logic will flow and process every event like on connection, on delete connection, on change connection, and so on. I just need to think it happening per frame. I just needed to manage the logic per kind of node. I learned a lot of things writing the NodeLogic system.

Of course with doing that approach, I have to make sure that pointers and references are handled correctly, but once I got the general idea and like pattern for writing each logic for the kind of node, it becomes very easy and in rhythm.

One of the hardest for me to evaluate was checking for cyclic nodes. I had to write a lot of recursive functions for that, but hey, at least I learned more about recursions. Also, recursion is way easier to write in static-typed languages compared to dynamic ones.

As for the other libraries/tools I have used, I want to give my gratitude for the developers for writing open-source and free libraries.

Here is a list of those that I have used: